Making a Splash with My Dogs 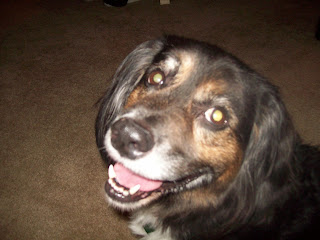 Last week, after cleaning my carpets, I felt the need to take a long soak in an warm, epsom salt bath. As I lay there in the tub, soaking in the lavender scent of the water, I was suddenly jolted back to reality as my 40 lb springer spaniel/dachshund mix decided to do a cannonball into the tub. Luckily, I was quick enough to where only his paws were wet, but the image was quite humorous.


If only Sampson were as eager to get in the tub when it comes time for a bath. This dog loves the water. When we go to my parents' home to play in the pool, he's in the water with us. But, heaven forbid I try coaxing him into the enclosed shower stall in my guest bath. It's as if he's being dragged off to the firing squad!

So, how do I get my "fluffy-butt"'s booty in the bath? Treats. Yep, you heard that...treats! Okay, maybe everyone knows that and I'm just a tad behind on the take on this one. Once he's in the bathroom (yes, I have to coax him in there first), I cover the floor with towels. If you've ever bathed a dog, you'd know that covering any surface with a towel is important. Especially when it comes to their shaking.

Once in there, I coax him with another treat in the actual shower stall. I like using the shower enclosure since it has a door, a great way to keep a dog who hates baths from bolting. And there is nothing like a sudsy dog bolting from a tub. (But then who would need to shampoo their carpet when the dog just did it for them) But I digress... I also love using the shower stall as I have installed a handheld shower nozzle. It makes it easy to grab and hold onto the dog at the same time.

Now, for doggy shampoo. I prefer an oatmeal shampoo for  my pups. Sampson has allergies in the fall, so using a soothing shampoo not only smells good, but helps ease his itchy spots. Now, with Boots, one hand full of shampoo does the job. But, then again...she's small and short-haired. Such a big difference from a dog who resembles his much furrier father, the springer spaniel. I need a hand full of shampoo for each "quadrant", as I call it, making sure his paws and ears are paid most attention. (Dirty ears are smelly)

Once lathered up, using the handheld, I thoroughly rinse off the dogs (separately, of course). Once rinsed, I ask the dogs to shake a few times before toweling them off before opening the door to the shower again. And, the reason why I carpet my bathroom with towels. They just love the root around the towels and rub their faces to dry them off.

And there you have it, my adventures in bathing my puppies. It's never a dull moment in my home with these two precious furkids.
bathing dogs dog dog grooming dogs grooming

Picking Up the Pieces

I think everyone can agree, 2020 was rough. It was rougher more on others than some, but it was definitely rough. There was a collective sigh of relief as the year came to a close, but I think the semi-automatic firearm that was used outside of my backdoor by a reckless neighbor was a bit much. This time, I would have been happy with just a firecracker.  I leave 2020 with scars and battle wounds and a new set of boundaries that are more secure than Fort Knox. I started out the year with one mindset, and left with another. A more eyes wide-open stance. A disbelief, as if I had been slapped by an Avenger after being in a trance from Loki's staff in The Avengers.  I've been hurt by a group of people in ways that may never be able to be repaired. I may be able to forgive one day, but the forgetting may be another thing.  It is interesting how smug and dead set wrong people can be when they judge others on things they see from the outside looking into only a one-sided picture. Oh,