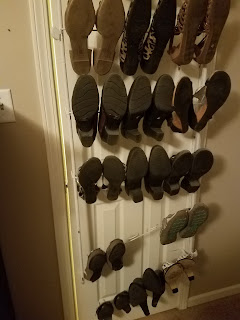 One of the things I started out doing first was tackling that big, ugly shoe rack on my closet door that was falling apart. It was so bad, that shoes really didn't stay on it any longer. It was time for it to go, as well as shoes that were no longer being worn.

When it comes to shoes, I'm a hoarder, plain and simple. I even have a couple of blogs addressing my addiction to shoes, and how I've been trying to break the addiction, and it has been working to a point. I've only purchased two pairs of shoes in the past 8 months, and that was purely out of necessity. In August, I damaged tendons in my right foot, but had interviews that I needed to attend, requiring dress shoes. So, I purchased a pair of dress shoes that would not hinder me while wearing a boot on the other foot. Then in December, I slipped and fell on an icy driveway, causing a bad sprain on my left ankle and being put in an air cast for awhile, so I bought a pair of shoes that were deeply discounted that would work with the cast while I was using crutches. 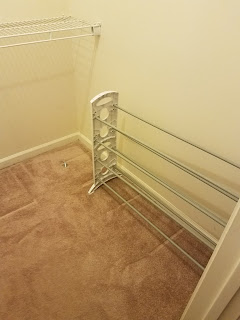 After my last post, Closet Redo: Oh, What a Mess!, I put together a shoe rack designed to hold 20 pairs of shoes that I had purchased at local hardware store for $15. After vacuuming the closest really well, I placed the shoe rack across from the 9 cube shelving unit on the other wall. It was not as long, and would allow the longer items to fall at the far end of it before the lower two racks on the back wall. I was very pleased with how it came out.

I did have a slight issue that was completely my fault. I didn't vacuum until after I put the shoe rack in the closet. The cord came unplugged unexpectedly, and when I turned to go plug it in, the handle to the vacuum wasn't all the way upright, causing it to fall on the aluminum bars of the shoe rack, bending one. Oops! Oh, well. It was easily fixed, but that one won't be going back. 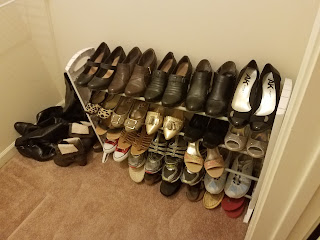 After my shoe purge, all of my shoes and boots fit perfectly in the area designated for them. I put the dress shoes on top, flats on the second shelf, sandals on the third, tennis shoes on the fourth, flip-flops underneath, and my boots in the back corner. I will say that I was amazed that after the purging of my shoes, I had decreased the number of shoes by half!!!!! That is quite the success for someone like me! The nice thing is that a lot of my shoes are in good enough condition that they can be either sold on resale sites or donated.

The thing about it is that you need to keep from second guessing yourself when you do this type of thing. You don't want to sit there and hmmm and haaaa while trying to figure out if you need or not. I looked at the items and knew whether or not I needed them or not. Plain and simple. It was a no brainer scenario for me.