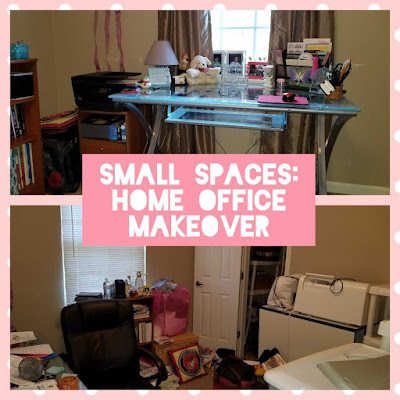 A few months ago, I wrote a blog titled Getting It Done: The Office Makeover, where I spent several days sorting, purging, and reorganizing a very disorganized space into what had become my designated "office/craft" room. Fast forward a few months, and the room is still the bane of my existence. It was too small for how I had organized everything, which made it feel cramped and claustrophobic. Something that doesn't make the room very inviting or inspiring.

In the last week, I accepted a job offer which will require me to begin using this space on a daily basis as my office for a good chunk of the day. So, that meant that I needed to find a better solution for how I was using the space. And fast. 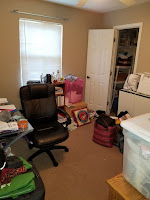 The first thing I did was to take stock of what I had in the room. For one, the room was starting to become a "catch-all" once again. This did not bode well for what I had intended it to be, or what I planned for it to become in my next career phase. So, I looked around and discovered that I would just toss things in the general direction of where I thought it should go, without actually putting it away.

The second thing I did was to actually measure the room. I never actually did this in the five years since I purchased the home, so I was never truly aware of the actual size. Now that I know it is actually a 10' x 10' square, I actually feel a little deflated. That's quite small in the grand scheme of things. I mean, I knew my home was small, but this made it feel even smaller.

I had already gone through my jewelry business items and reorganized it to fit onto one shelf. This left two identical shelves empty, so I was able to list those on the Facebook marketplace. Let's just say they were gone in less than 24 hours. 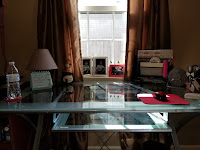 The next step was to do the sorting, purging, and reorganizing. This also meant that I needed to move furniture around all by myself. And this furniture was not as light as it might appear. I decided to move my grandfather's glass top desk in front of the window, where I had also hung curtains I had kept from my old apartment. They fit in perfect contrast against the color of the walls.

Everything on my desk I already owned. The lamp I purchased while I was in college in the late 90's, while everything else were items I purchased over the years. 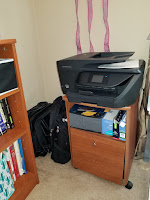 This also allowed me enough space to move the printer stand to the left of the desk, and still have enough room to store my different laptop bags for when I need them next. On a trip to the Dollar Tree, I picked up several different types of fabric totes to hide and store various items in plain sight. The one I used for the printer stand was just the right size for holding printer paper, labels, and manila envelopes, while other envelop boxes fit in nicely next to it.

As you can see, my poor printer stand is old and rickety, and will probably need to be replaced or just shored up in some way or another, but for now it will do its job. The bottom drawer is a filing drawer, which comes in handy for storing important documents. 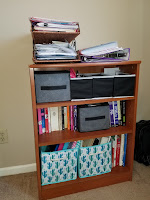 The bookcase was another story. It had been cramped and overfilled for too long. I had done a huge purge of all of my books in one of my first blogs, but I still had quite a few left. This gave me a chance to go through them once more and pare them down to what I needed at this time. I kept programming language, testing, and terminology books, as well as others I enjoy nearby. I used more of the fabric storage totes to store things like photos, journals, and other necessities that I can reach for in a pinch.

I wanted to keep everything for my office to one corner of the room, that way everything would have its designated area. But I also had my sewing and craft items that still needed to reside in the room. I had inherited my grandmother's sewing machine and table, so I needed to make a space specifically for it. Luckily, it all fit along one wall, making the room not feel as crowded anymore once I was finished. 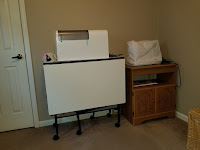 The nice thing about this makeover is that I didn't spend a lot of money. I used a lot of what I already had, and what I did buy, I purchased from places like Dollar Tree or Five Below. I know that I will probably have to replace the printer stand at some point, and that I would like nicer shelves for the jewelry business and the books, but for now, what I have works. In fact, I have already purchased contact paper (shelf liner) to repurpose the bookshelf and printer stand on another day.

But for now, here is the final product of today's makeover project: 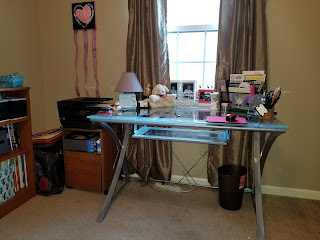 One thing I still need to do is put up artwork and a whiteboard. I already have those, including some artwork that I created myself. The whiteboard is important for brainstorming or keeping track of work related items as I go about my day, or week. I found one at Target for $19.99. I had already purchased dry erase markers and eraser for my master bath where I sometimes write inspirational messages for myself. 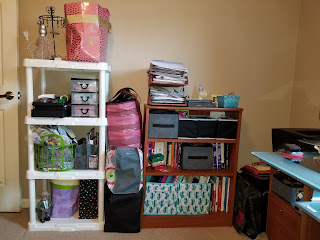 The other thing that really worked out great is that I now can close the closet door in the office. To be honest, I don't remember when it was last closed, or if it had been since I moved in. That's pretty sad.

I did put my jewelry business shelves next to the bookcase, but left enough space to place business related totes between the two. This way they won't fall over or get tripped over if left out. I wanted my jewelry business to be near my office as it is part of the office aspect, as well.

And finally, it finally felt great to have room to move around in the room. What you don't see is my office chair, and that was because I actually was able to move it out of the way in order to take the photos. That was not easy to do before. But this project isn't finished, yet. I still want to hang artwork. I need to hang the whiteboard. I need to repurpose the bookcase and printer stand. But those will be in another blog. And hopefully it won't be too far behind this one and it won't lament on how this failed either.
home office small spaces