Finally! The Walls Are Painted 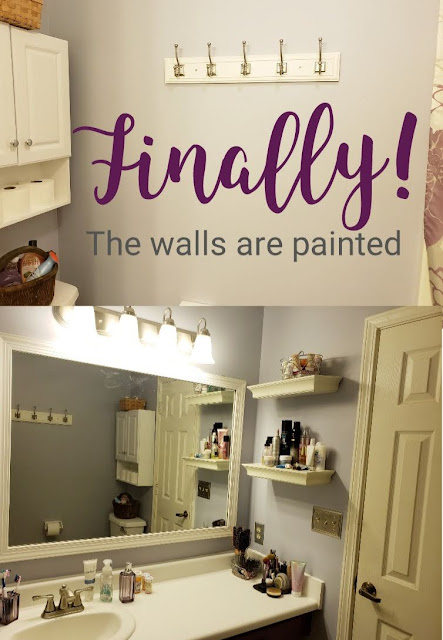 On November 25, 2018, I wrote about my bathroom remodel project in Master Bathroom Renovation: Purple Haze. The only thing was that the project never was finished. I still needed to finish painting the walls, but time was a problem. Plus just having the energy to do it.


But today, it was finally time to do it, and I'm perfectly happy with the end result. The color is called Misted Mountains by Baer. I picked it up at the same time I purchased the one for the vanity. It is a nice satin, so it will be easy to care for. The hardest part of the whole project was painting around the vanity mirror and lights. It made the toilet look like a cake walk!

The only things left to do now are: touch up worn out areas around the door frame, cover up my errors on the ceiling, and hang a hook rack (similar to the one reflected in the mirror, but only 3 hooks) by the sink. Once finished, I'll be happy to call this renovation complete.

The Heart of the Matter: Life Changing News

Imagine feeling like you are having a constant asthma attack, but unable to do anything to get relief. Imagine just the simplest tasks causing you to be out of breath, or make your heart beat even faster, including just tying your shoes, or getting dressed. Imagine having to sit down to rest constantly, because you feel like you are about to pass out. Or having people ask if you are okay, because you sound like you just ran a marathon, when all you did was sweep a small area in the kitchen. This has been my life for sometime now, and has only progressively worsened since having COVID earlier in the spring/summer. You may say "it is because you are fat and need to lose weight", but it is a bit more to the story. Back in November 2019, I was admitted to the hospital with fatigue, dizziness, and the possibility of blood clots due to the swelling in my leg. What they found at that time was only an issue of blood clots. Only. I released with no further plan, except that I became v