What Now? Finding the Path to Pursue 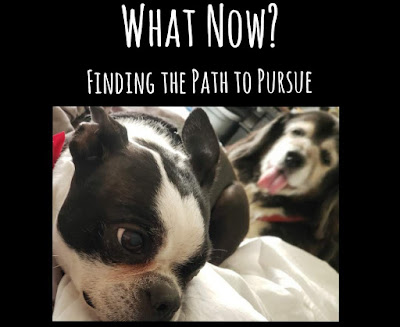 I did the easy part of identifying the blaring problem I'm facing. Now comes the hard part, deciding on how to achieve that success and where to begin. It's not as easy as it sounds, or seems. I've got a lot of demons I need to deal with before I even get to the nitty gritty.

One of the questions I am asking myself is how did I get to this point? I know depression, a back injury, medication, and apathy did play a lot into it, but how did I even get to that point? Where is the true beginning of this journey? What is it that I really need to work on to make this a lasting, lifelong commitment, rather than just another fly-by-night attempt that fell by the wayside.

In other words, I'm in this for the long haul, and I'm not taking shortcuts. Although, cooking ones would be lovely right now. As well as, winning the lottery. The former is a lot more likely to ever happen. I'll be struck by lightening twice before the latter happens. Just my luck, I'd survive and it would just add to the weight.

But let's not go there, let's just try to figure out the first steps. I mean, Flylady is always saying "baby steps" lead to success. I'm more apt to believe her with that one, which is why I tend to focus on short term goals, rather than dwell on my past and any unrealistic goals I might set for myself (in other words, setting self up for failure is not an option).

The one thing I keep thinking about is my depression and with bipolar disorder. I have not always been an introvert. In fact, I used to have a pretty full dance card throughout the week. Unfortunately, heartache and separation (a/k/a: being rejected by someone I adored, friends moving on and leaving me behind when I moved to another state, and those closest to me not being in the same state or region as I am).

So, while it important not to live in the past, it is actually even more important to reconcile the past. The two are not interchangeable, as reconciling the past means leaving it there to stay once you are done with that step. And while I advocate focusing on the now, my past has been something of a bane of my existence.

I've made mistakes. Huge mistakes. Mistakes that embarrass me. Mistakes that I regret. Mistakes that harmed me. But I am still here, living and breathing. Nothing has killed me, yet, although there have been attempts. I need to learn that I cannot undo what has happened. I can only prevent from repeating mistakes, and some have been repetitive. I need to forgive myself in order to move on. I need to reconcile with the fact that I cannot change anything that has happened, but have full control over my now, which has a direct correlation the future. I want a bright future, not the one that seems to be looming at the moment.

However, I'm still trying to figure out where to begin that process. I mean, drudging up old feelings, hurts, and wrongs never pleasant, but how can one move on without acknowledging, forgiving, and moving forward first? There is a gaping wound under there that is festering.

I once heard someone say that wounds need to heal from the inside out, and in order to do that, you must let it breath by ripping the band-aid off. The ripping off of the band-aid is actually the part that hurts the most. Sure, there will be a scar left behind, but that reminds of a battle we overcame. Not like Frodo's wound from Weathertop in Lord of the Rings that never quite healed. Ours are not caused by blades. No, ours are not mortal wounds, but ones that we've just left untended too long.

So, for now, I'm going to open Penzu, the journaling app, and start to rip those band-aids off, one by one. Then, I'll sit in prayer and meditation on the healing.

Something just came to mind, hand writing each issue on their own single piece of paper, then symbolically ripping them up, one-by-one, or just burning them (safely), one-by-one. Whatever is chosen, it needs to have meaning. That's all I know in my heart.


healing from the past new beginnings