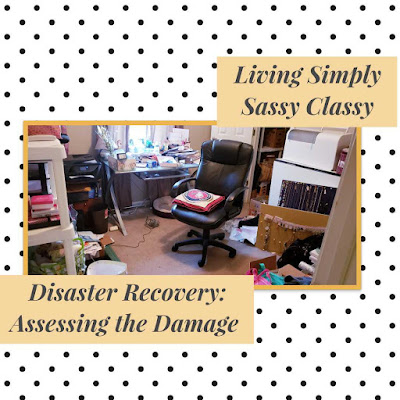 I am embarrassed. I'm beyond words. I am so ashamed. Somehow, I've allowed my office to go from the glorious success found in this previous blog to this:

It didn't happen overnight. In fact, the office stayed in great shape for quite awhile. It is just that circumstances beyond my control happened, and the office fell by the wayside, and became a dumping ground in the interim. The result was the photo above, taken just a few moments ago.

For one, I work from home, and I work more efficiently when I'm able to work from my office. On July 11th, I was attacked by a swarm of yellow jackets, and the result of where the the welts were, left me unable to sit in the office chair (despite the fact that it is really comfortable).

But some other life altering issues took over for the month following, and my office became a dumping ground, while I was relegated to working from my living room until I was back to "normal". I've been back to normal for a few weeks now, but since the office hasn't been, I've not been able to move back into my precious work space. 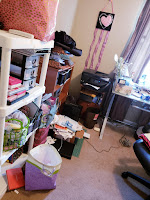 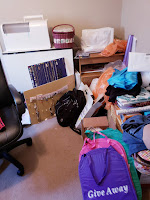 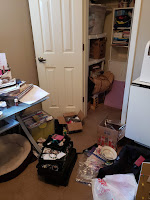 However, with it being a long weekend, I felt that it was time to stop the madness and assess the damage. In reality, it isn't as "bad" as it appears. It is all surface level, and most is just things that need to be put away, thrown away, or given away. Hence, the set of colorful, mesh totes near the front of the photos. I purchased them from Flylady a few years back (they are no longer in stock), and they are perfect for a job like this. The key is not to overthink and to not hesitate. That's when it becomes burdensome and takes too long.

So, the next step is just to go into that room and just start. So, off I go. Hopefully I'll be able to post the "after" blog tonight. If not, in a day or two. Fingers crossed!

The Heart of the Matter: Life Changing News

Imagine feeling like you are having a constant asthma attack, but unable to do anything to get relief. Imagine just the simplest tasks causing you to be out of breath, or make your heart beat even faster, including just tying your shoes, or getting dressed. Imagine having to sit down to rest constantly, because you feel like you are about to pass out. Or having people ask if you are okay, because you sound like you just ran a marathon, when all you did was sweep a small area in the kitchen. This has been my life for sometime now, and has only progressively worsened since having COVID earlier in the spring/summer. You may say "it is because you are fat and need to lose weight", but it is a bit more to the story. Back in November 2019, I was admitted to the hospital with fatigue, dizziness, and the possibility of blood clots due to the swelling in my leg. What they found at that time was only an issue of blood clots. Only. I released with no further plan, except that I became v